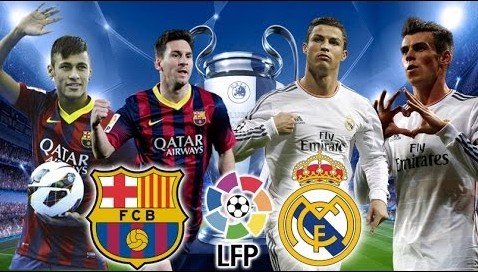 Forget the Solar eclipse and the Spring Equinox, this weekend all eyes will be on two soccer grounds as four of the most intense and passionate rivals resume hostilities on opposite sides of Europe. First up, at 1:30pm UK time, it’s the two biggest clubs in English football – Liverpool vs Man Utd. As if the Scousers v the Mancs needed any extra spice, this game could be pivotal in deciding next year’s Champions League spots.

With Utd in 4th and Liverpool two points behind in 5th, both are arguably still in with an outside chance of winning the Premier League. But their main focus will be on grabbing at least fourth place in the table – and the final Champions League spot.

It’s one of the best in today’s game. I always look forward to going to Anfield. I love to see good football – Pele

It could be argued that both clubs have had slightly disappointing seasons and that both sets of fans would have expected more back in August – Liverpool because of last year’s agonising ‘slip up’ (ahem) and United because of Van Gaal’s appointment.

But that will all be forgotten come Sunday afternoon, when all that matters is getting one over on their North West neighbours and getting the latest instalment of decades of bragging rights.

And if you still fancy one of them for the title, the current odds are Liverpool 150/1 and United 66/1

bet365 have a whole host of bonus offers for new and existing customers which are well worth checking out.

Later in the day, arguably the biggest game in world football takes place, with Barcelona welcoming Real Madrid to the Nou Camp for El Clasico. Barca currently hold a 1 point advantage over Real at the top of the Primera Liga table, and both teams will be desperate for the three points that will ensure they go into the final 10 games in pole position.

Barca head into this game as odds-on favourites. It was all very different last year when these two met in October’s El Clasico. At that point, Barcelona were finding life under new coach Luis Enrique a challenge, to say the least, while Real Madrid were nearly halfway through what would end up as a 22-game winning streak.

Recent form in Europe backs this up – Barca having beaten Premier League champions Man City 1-0 midweek, whilst a poor showing from Real saw them lose 4-3 to Schalke last week.

With Iscos and Kroos keeping things tight at the back and Cristiano Ronaldo loitering with intent upfront, Real will be giving it their best shot (literally) but the bookies rarely get things wrong, and it’s difficult to disagree that Barca are a pretty safe bet.

bet365 currently have Barca at 8/11 and that’s probably the safest home for your money, but if you’re feeling adventurous, the value bet may be Real at 19/5.

In addition to the best range of live streaming events and in-play markets available online, bet 365 also have a great range of bonuses for new and existing customers.

These include the Euro Soccer acca bonus, the Bore Draw money back offer and the On the Move mobile betting bonus.

For full details of all these offers, check out this dedicated page on our main site: bet365 betting offers.