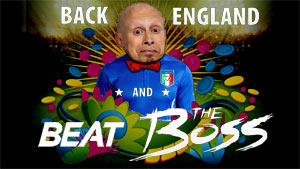 Beat the Boss and get up to 100% Cashback from bgo!

bgo have extended their excellent Beat the Boss promo (starring Verne Troyer) to include England’s matches in the World Cup.

In a similar fashion to the Casino TV promotion, bgo are using the Boss character to challenge England supporters to put their money where their mouth is, confident in the knowledge that the Boss can’t lose!

The challenge comes in two stages:

If England get knocked out during the Group Stages, you’ll get a 100% Reload Bonus up to £100.

If England get beyond the Group Stages, you’ll be able to claim up to 100% CashBack on your Net losses!

Here’s what’s on offer if England progress through each stage of the tournament:

Sign up at bgo now and back England all the way to the final!